If you only read one article on electoral reform, make it this one. Its bloody good plus it has the bonus feature of highlighting Nick Cohen's profoundly cloacan nature.

This is a first attempt at blogging from my smartphone so will be interesting to see if it looks like shit.

Posting from the smartphone proved to be a debacle, as visitors to this post earlier may have discovered. My apologies. Blogger just doesn't seem to work in Opera mobile. I got the title and half a sentence in but when I tred to add an html link it then refused to accept anything more. Subsequent edits also failed and so the result was gibberish. Still, not much different from business-as-usual here, hey.

Dappy New Year to all the nice people!
at 8:37 am 2 comments: Links to this post

The Guardian has a complete fucking moron on its payroll

What cuntard is responsible for this fucking travesty? 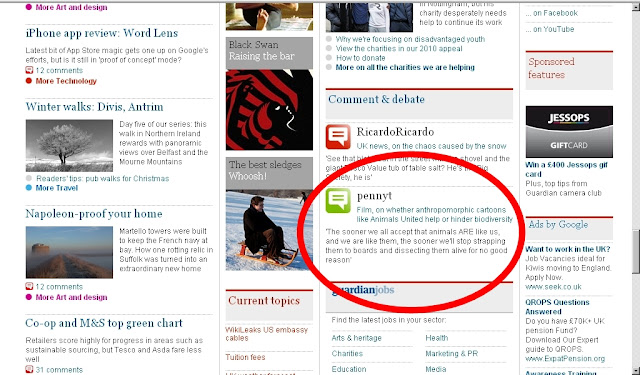 Seriously? How fucking cuntishly thick and demented do you have to be even consider promoting lunacy like that to the front page of your website.

Why has this comment been selected for promotion to the front page of the website? It is moronic. No one except psychopaths strap animals to boards and dissect them alive for no good reason. Personally, whenever I dissect a living organism I have very, very good reasons for doing so because I am a scientist and the research I conduct provides vital information to help us manage our environment sustainably and effectively. Furthermore, I work exclusively with lower animals such as worms and molluscs, which lack the sophisticated neural system to even experience pain and suffering. This is why experiments conducted upon such organisms are not covered by Home Office regulations. If I were to work on higher animals such as fish, rodents or even primates then I still would never find myself strapping them to boards and dissecting them alive because this is illegal and unethical and no one does this any more!

Shame on the Guardian for drawing attention to this stupid comment. What are you going to do for an encore- highlight the words of some lunatic calling for ginger people to be burnt as witches?

Let's see if it gets deleted.

Excellent! Some pig-ignorant fucktard has already posted an inflamatory response. I returned fire:

Allow me to paraphrase your response:


"Yeah, science is dumb cos I dunt unnerstand it."

Still happy enough for it to provide you with the computer or phone you've posted this from, hey. And the food production system that keeps you alive, the medicines that cure your many diseases, the engineering allowing you to stay dry, warm and secure.

In response, I believe worms don't experience pain and suffering because I stand on the shoulders of scientific giants who have accumulated evidence to suggest that they can't. The idea that an animal as simple as a worm or lower molluscs (I specifically exclude cephalopods because of their sophistication) can experience any mental stimuli in a manner similar to mammals is laughable to anyone with even the most basic appreciation of comparative anatomy. I suggest you read this Wikipedia article. There are ample referenes at the end to peer-reviewed papers. Pay particular attention to the Comparative anatomy and evolution section.

I hope your arrogance in insulting and contradicting me is underlain by an advanced understanding of the subject that you will be willing to share with me here. I would be most grateful if you could provide a single piece of evidence which suggests that lower animals can feel pain because, as a scientist, I am anxious to learn and keen to establish the truth in an objective and well-evidenced fashion.

If I sound uptight and condescending, its because I am.

Okay, after re-reading his comment I realised I hadn't been nearly harsh enough with this guy. So here's the follow-up:

Sorry, I tried to refrain from challenging this idiocy but I'm so profoundly irritated by @Britcominghome's comment that I'm just going to go nuts.
You wrote:

"That a living entity doesn't 'experience pain and suffering' is simply a moronic thing to say."

So, according to you, an amoeba can experience pain and suffering, yes?
How about a cyanobacterium?
How about the moss growing out on the deck?
The tapeworm burrowing its way through you intestines and the bacteria they contain?

You're an idiot. Mainly for that comment, but also for the "blacks" one too.

"So, much as I’m revolted by the way in which nature is being squeezed into a column of figures in an accountant’s ledger, I am forced to agree that it may be necessary."

This position slightly disturbed me because, as might be clear from this blog, I have considerable intellectual wood for eco-economics. And yet George, whose ideas give me a similar degree of cranial titillation as Herman, finds the underlying concept of Herman's work "revolting". I will ping a link to this article to George, not just because it lays out the conceptual rationale behind eco-economics so well, but because it explicitly condemns trivialisation of ecosystem services and resources by the bean-counters that so offends him.
at 8:09 am No comments: Links to this post 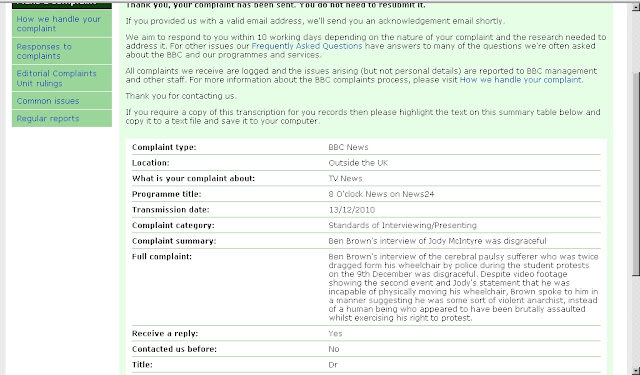 Busy is what I am these days. I'm still hunting for legitimate sceintific employment and I'm doing drudge work in the mean time. So I don't have time to blog, really. I am getting very into Twitter, however so if you want to know what I'm thinking you can find me there. I'm still trying to figure out how to do those neat little Twitter round-ups that real bloggers sometimes produce. Anyway, apologies to both my regular readers for the lack of punkistry.
at 9:06 am No comments: Links to this post

punkscience
I'm actually pretty ugly and my penis is smaller than the Caucasian average. At 31 years of age I still can't grow a proper beard. I used to blog but I've pretty much given up now. You can find me on Twitter these days where I take pleasure in staring misanthropy in the face and waiting to see who blinks first.

A better world is waiting: