has anyone ever done cost/benefit analysis on whether changing government policy is worthwhile?

The Salmon centre has just lost 80% of its funding from its 48 streams as state funds for the young dry up. Half its staff have gone, losing irreplaceable experience built up over years.

That irreplaceable experience. Does it ever get accounted for in planning the effects of cuts? Furthermore, does anyone ever account for the time lost to adapting and acclimating to a new legislative system when they plan these hatched jobs or clean sweeps or new guidelines? I don't think they do. Punkmum was a primary school teacher, retired a few years back. She used to dread general elections because the new lot would inevitably "reform" the education system- both were awful at it. As a result, half her career was spent familiarising herself with some new legislative environment, instead of refining her performance under a single one.
The same goes for hiring and firing people. In the science career path you are always seeing PhDs and postdocs come and go. The technical staff are broadly stable, unless your university enacts one of those sporadic orgies of destruction and contraction that have characterised the last decade. As a result I am very appreciative of the enormous value of the knowledge and expertise a single, experienced human being can carry around with them. When a good researcher moves on your lab suddenly has a hole in it where things don't get done and problems that used to be easily resolved suddenly become monstrous challenges. Furthermore, collaborations which once might have added novelty and power to an experiment- and yet were frequently easily achievable due to the experience of the collaborator- are no longer available or, again, become inordinately challenging to achieve. In contrast, when new staff appear they take time to acclimate to the bureaucratic environment and to establish themselves to the point when their expertise becomes available. This is more than a casual reference to Adam Smith and the division of labour. As an aside I also want to comment that, due to the overly competitive and highly results-driven research environment that has been cultivated in the UK in the last ten or fifteen years there are consdierable obstacles to young researchers engaging in any significant collaborations outside of their core experiments.
So I am very understanding when Toynbee writes about the loss of experienced staff and how an institution  ca be crippled by the loss of a few, key staff (or pretty much all of them, in her case). This is not an anti-reformist post, as with most of my posts I'm calling for decisions to be made rationally and transparently upon the best evidence possible. And that includes costing the relative benefits of any legislative changes against intangible losses such as expertise as well as more tangible ones such as the time taken to train and familiarise new staff or for established staff to adopt new procedures.
Yawn.
zzzzzzzzzzzzzzzzzzzzzzzzzzzzzzzz
at 9:25 am No comments: Links to this post

ecosocialism or barbarism: there is no third way

~~~~~~~~~~~~~~~~~~~~~~~~~~~~~~~~~~~~~~~~~~~~~~~~~~~~~~~~~~~~~~~~~~~~~~~~~~~~~~~~~~~~~~~
I'm profoundly moved by this critique (pdf!) of my erstwhile champion of awesome, Herman Daly (via Climate and Capitalism).You see, I'm definitely a third way kind of person myself: I'm quite happy to rail against capitalism but I'm not at all convinced by the fractious intellectual snobbery of the socialist mob. That's why I mention evidence-based policy so often: because it rejects all and any ideology. I suppose I'm a technocrat.
Anyway, back to the epic critique of our boy Herman. The main point that the author, Richard Smith, makes about Herman's ecological economic movement- and this is reinforced in his rebuttal of Herman's own response to the original article- is that Herman considers it is possible to conduct steady-state capitalism whilst Smith considers capitalism to be a fundamentally expansionist concept that cannot be constrained by regulation. This is a point I have flirted with several times, comparing the race between regulation and the armies of lawyers accountants and scientists employed by corporations  to circumvent that legislation to the behaviour of the Red Queen from Alice in Wonderland. (A metaphor that I am not the first to appropriate.) Unfortunately for Herman, and also for a variety of other "steady state capitalism" advocates , I find this argument entirely convincing. As does Smith, who takes great pains to clarify that he doesn't have the ready-formed and robustly functional alternative to SSE that Herman demands of him in his response. Instead, Smith calls for an urgent debate to be inititated to establish the shape of such a system before we are run out of time and resources.
At this point, unfortunately, my interest in eco-socialism wanes because I cannot see any such debate occurring on any significant scale. Indeed, such debates have been occurring in isolated pockets- and even in more medium sized institutions of late- but they remain an activity of the sideline and I cannot believe that any such conversation will reach the mainstream before the oil runs out, the seas rise and acidify and Sarah Palin launches her holy war against European Islamofascism.
punkscience sighs deeply and flicks back to his PDF of Survival+
at 9:23 am 2 comments: Links to this post

on democratic participation and work hours

~~~~~~~~~~~~~~~~~~~~~~~~~~~~~~~~~~~~~~~~~~~~~~~~~~~~~~~~~~~~~~~~~~~~~~~~~~~~~~~~~~~~~~~
How many times have you heard people say, when confronted with a political position, something along the lines of "oh I don't have time to follow politics"? We must all have heard some similar excuse and I, like many of you, have often put this down to willful ignorance, laziness or some other dysfunction. On reflection, however, I appreciate that politics is fiendishly complicated, not least because of the inordinate amount of proganda and misinformation propagated by the media. The situation is made worse in countries such as the UK, that have unreformed and near-mediaeval constitutional arrangements.
I will happily spend several hours a day reading links from twitter and other sources to keep up to date on developments that personally interest me. Although I consider myself well-educated I still can't offer any truly informed opinion on issues such as health and safety policy, social care, the health service and other issues that I'm just not that excited about. And so I'd like to contrast my position with what must be a significant minority of the electorate of the UK who don't possess the means to access virtually any reasonably objective sources of information about our democracy. These people still spend a considerable fraction of their waking hours at work or occupied in some other useful activity such as caregiving.
Citizens not having time in their lives to acquire sufficient knowledge to engage in constructive politics is a glaring symptom that our economic culture is depriving people of the opportunity to participate in our democracy. For our democracy to function these people need the personal time to allocate to such activity, the information technology to access them and the langauge and comprehension skills to understand them.

To emphasise this point, let me present a contrasting example of the electorate to my first one. Instead of Mrs Caregiver, lets look at Mr Accountant. Mr Accountant works 70 hour weeks for a big firm in the city. In this capacity he might well be an expert in accountancy law and policies affecting it but he lacks any broader understanding of politics. He has no incentive to gain one, either, because his six figure income allows him to afford a lifestyle remote from the majority and unaffected by such piddling social issues as unemployment, healthcare, environmental or foreign policy. This man has no greater incentive to engage in enlightened politics than Mrs Caregiver.
at 3:26 am 2 comments: Links to this post

This is an appalling lie being promoted by an ostensibly credible and influential media source. Let me explain why.
Much of the article quotes verbatim from the website of an EU project called AXLR8. However, I can find no statement that accords with the article's headline statement. This is unsurprising as the statement is complete bollocks. If animals don't show how chemicals act in humans, where have all those marvellous medicines that cure cancer, prolong life and defeat pathogens come from? As the Pro-Test website states:

Without animal research, medicine as we know it today wouldn't exist. Animal research has enabled us to find treatments for cancer, antibiotics for infections, vaccines to prevent some of the most deadly and debilitating viruses and surgery for injuries, illnesses and deformities.

It seems that the Graun headline writer has pulled this absurd statement from thin air. Complaint sent.

Just checked the Guardian website and they have changed the headline. It now reads "How animal testing is minimised". Just to confirm my side of the story, here's a screenshot of the google search for the original title: 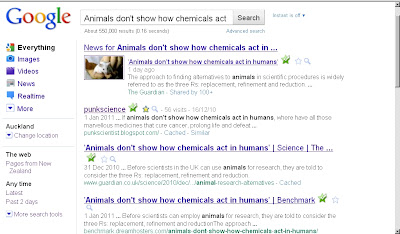 And here's the Guardian page that that first link took me too: 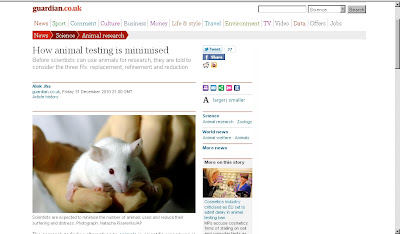 Note the changed title. Now here's Google's cache of the page as it still was at 12:51 GMT, 9 hours after I posted this: 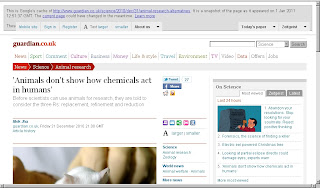 Note the original title in place. There is no explanation or apology attached to the article mentioning why they've changed the title.

I'm glad they've changed it because it was a fucking journalistic travesty but I'm appalled that that shite got put up in the first place. Vivisectionists have a hard enough time reminding the placid herd how important our work is without national newspapers misrepresenting and undermining us too. My fear is that the damage has been done. The number of google hits for the original title shows how quickly the story was propagated across the internet. I want to compare this to a recent post I read on one of the media watch blogs  but I can't remember where it was. It was about how insane tabloid stories become accepted as fact by the public because, even though the final paragraph of story presents facts that contradict the headline, the headline is all that most people take in (particularly tabloid readers, who struggle to fit more than a dozen words in their head at any one time). That process seems likely to have occurred here too, despite the less moronic nature of the average Graun reader. The headline has been changed within hours  but not before it has been reproduced a thousand times on all the shitty little bunny-cuddling blogs across the world, written by people determined to see people die of curable diseases.

I should also emphasise that this is the second time in less than a fortnight that I have caught the Guardian promoting mindless antivivisectionism. I'm considering complaining to the PCC as this appears to consitute a breach of Clauses 1.i and 1.ii of the Editor's Code of Practice. My grounds are that the headline was clearly inaccurate and misleading and that the Guardian failed to correct the headline with "due prominence" by adding a footnote to explain why it had done so. I'd like to see an apology too.

Okay, so now we have a third example of the Guardian misrepresenting vivisection. This article has a footnote explaining why one of the bullet points in the subheading was amended. Its late and I'm tired so I'll finish this tomorrow but FOR FUCK'S SAKE!!!!!!!

Just checked Twitter before shutting down for the night and Alok Jha has responded to my query about the absence of an explanatory footnote with the following:


alokjha  @punkscience No idea, there shld be note. Hope readers' ed will do it when he's in from hols nxt wk. Headline changed coz it was obv wrong

punkscience
I'm actually pretty ugly and my penis is smaller than the Caucasian average. At 31 years of age I still can't grow a proper beard. I used to blog but I've pretty much given up now. You can find me on Twitter these days where I take pleasure in staring misanthropy in the face and waiting to see who blinks first.

A better world is waiting: